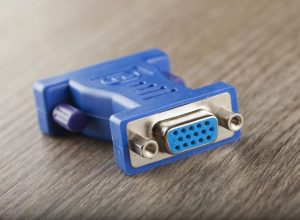 VGA is an abbreviation and it stands for Video Graphics Array, a type of standard interface or connection consisting of specialized ports, cables and connectors between video devices, such as projectors and monitors. The ports and cables used for setting up a VGA connection have a recognizable appearance: the plug at the end of the cable has 15 pins, arranged into three rows, while the port on the device to be connected has 15 pin holes to accommodate the cable’s pins. However, certain applications have ports that consist of pins – for these applications, cables with pin holes are available.

The VGA standard was developed by IBM and it was launched in 1987. The interface is very widespread today – even the latest computers and other types of digital devices are fitted with VGA cable outputs. However, video technology has advanced a lot since the late 1980’s, new formats, standards and interfaces have been introduced since then, which means that communication between VGA and other standards became necessary. The problem can be solved simply, with the help of a cable that converts the signals used by the VGA device to the forms that can be interpreted by high-definition multimedia interfaces (HDMI) without losing data or compromising data quality.